A perfect storm could potentially be on the horizon for owners of private residential properties in Singapore, especially those who are highly leveraged, said the Institute of Real Estate and Urban Studies (IREUS) at the National University of Singapore.

Rising interest rates amid growing inflationary pressures as well as an impending increase in the housing supply are expected to bring headwinds for homeowners relying on rental income, based on the research institute’s analysis of historical data.

The Business Times (BT) reported in late April 2022 that several banks in Singapore had suspended fixed-rate home loan packages, which offer a flat interest rate, amid the surging cost of funds. Mortgage advisers polled by BT also said that mortgage rates in the city-state could be raised by 3 times this year.

IREUS noted that the 3-month Singapore Interbank Offered Rate (Sibor) usually appears to move in tandem with core inflation, albeit with a lead-lag effect between the 2 time series, as the central bank here adjusts monetary policy to support sustainable growth.

However, from 2010 to 2015, the 3-month Sibor stayed relatively flat despite higher inflation from the end of 2011 to the first half of 2012. Part of the reason was the US Federal Reserve planning to keep short-term interest rates near zero to spur growth.

Sibor is derived by averaging the rate at which Singapore banks loan from one another. It is a popular benchmark for floating-rate home loans, but will be phased out by the end of 2024 and replaced by the Singapore Overnight Rate Average (Sora).

Domestic interest rates in Singapore are largely determined by global market movements and especially the US. Today, as inflationary pressures look likely to persist, central banks around the world are under pressure to raise interest rates to try to rein in soaring prices.

“Correspondingly, the Sibor, and mortgage rates in turn, are expected to rise further,” IREUS noted.

Lee Nai Jia, deputy director of the research institute, pointed out that these higher rates will likely put pressure on financially constrained homeowners.

That being said, the current robust rental market for private homes offers a silver lining for investors leasing out their properties, as the rent collected can help provide a buffer to cover their higher mortgage payments.

“Additionally, buyers have to comply with the total debt servicing ratio (introduced in 2013) that adopts 3.5 per cent or the prevailing market interest rate, whichever is higher. This means that borrowers after 2013 – who were subject to more stringent underwriting criteria – will be in a better financial position to face the upcoming rate hikes,” Dr Lee noted.

However, the strength of Singapore’s private residential rental market will soon be put to the test as more units are slated for completion for the rest of 2022 to 2024.

Rents tend to decline when the private housing stock increases. The market also took longer to absorb the stock during periods when the increase was significant. 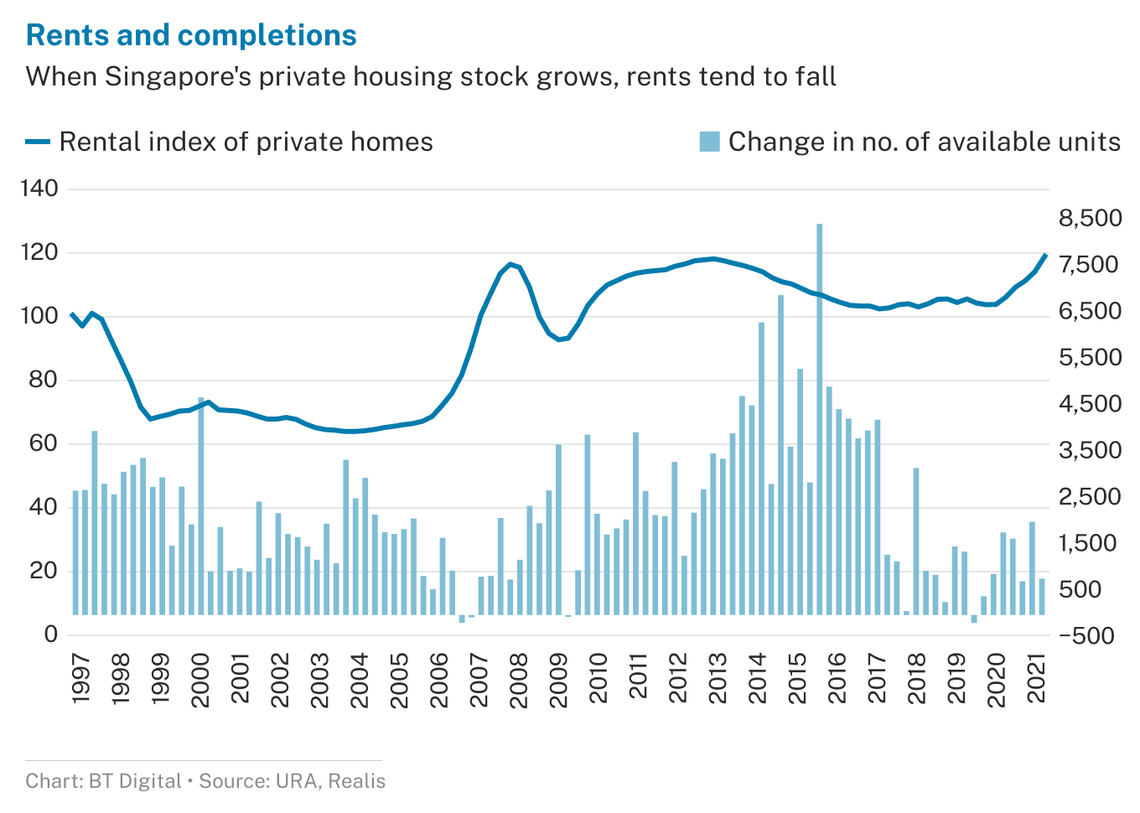 This new supply will weigh considerably on the rents of private homes, unless there is a large influx of expatriate workers to fuel rental demand, Dr Lee said.

“Coupled with the possibility of a recession, homeowners who relied on the rents may find themselves in a precarious position in the worst-case scenario, especially if unemployment starts to climb.”

He added that if the government had not taken preemptive measures last December to encourage financial prudence, the private housing market would have been particularly vulnerable to external shocks.

And in terms of government land sales, while there appears to be strong demand for private housing, introducing too much supply will stress the market if and when the economy is not performing well. “This probably explains the authorities’ measured approach in increasing the supply of new private homes,” Dr Lee said.

We are here for you every step of the way.
For any enquiries, please fill up the form and we will be sure to be in touch.

our teamour officeswhat our clients are sayingfrequently asked questionsContact us